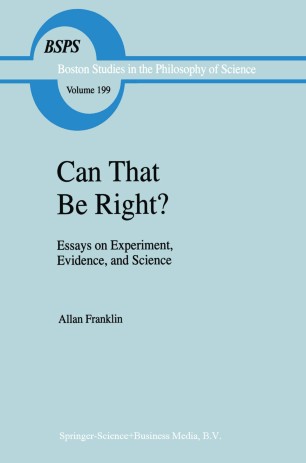 Can that be Right?

Essays on Experiment, Evidence, and Science

Part of the Boston Studies in the Philosophy of Science book series (BSPS, volume 199)

In this collection of essays Allan Franklin defends the view that science provides us with knowledge about the world which is based on experimental evidence and on reasoned and critical discussion. In short, he argues that science is a reasonable enterprise.
He begins with detailed studies of four episodes from the history of modern physics: (1) the early attempts to detect gravity waves, (2) how the physics community decided that a proposed new elementary particle, 17-keV neutrino, did not exist, (3) a sequence of experiments on K meson decay, and (4) the origins of the Fifth Force hypothesis, a proposed modification of Newton's Law of Universal Gravitation.
The case studies are then used to examine issues such as how discord between experimental results is resolved, calibration of an experimental apparatus and its legitimate use in validating an experimental result, and how experimental results provide reasonable grounds for belief in both the truth of physical theories and in the existence of the entities involved in those theories.
This book is a challenge to the critics of science, both postmodern and constructivist, to provide convincing alternative explanations of the episodes and issues discussed. It should be of interest to philosophers, historians, and sociologists of science, and to scientists themselves.