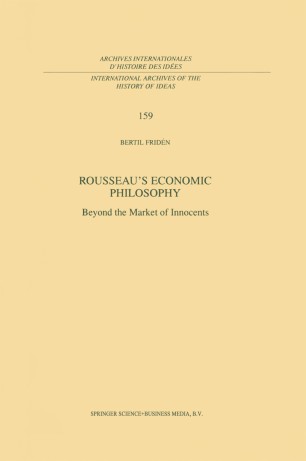 Beyond the Market of Innocents

An increasing body of literature concerns the economics of those highly appreciated qualities of life that are not easily provided by market exchange. Today these problems are visible as never before, for example environmental problems. But already at the dawn of industrial society the problem had been observed by Rousseau. His statements on the economy claim to take these problems into account with due importance. In this way his economic philosophy concerns a different domain of the economy from, for example, Adam Smith's work. Rousseau's philosophy attempts to consider phenomena later labeled information asymmetries and information costs, bargaining, collective good problems. Some of Rousseau's most puzzling social proposals (on theater, women, music, etc.) can be explained by his well-argued conviction that an optimal economy demands a high social morale, a communicative morale. He proposes an economic philosophy for the most important properties of richness - such as experiencing the unique, and being free although dependent on others (empowerment). It is for the adult capable of true deliberation, not for the trifle of the innocent child. He develops a concept of richness that is close to the Aristotelian capability-concept, later explored by Amartya Sen.
Rousseau's economic philosophy has not been treated in a monograph before. The book should be rewarding to those interested in social theory, the history of social and economic thought, problems at the margins of market exchange, e.g. cultural economics, environmental economics, students of Rousseau and the thought of the 18th century, welfare economic theory in the direction of Arrow or Sen, and Poanyi's and others' theses about the transition from selfsufficiency to market.