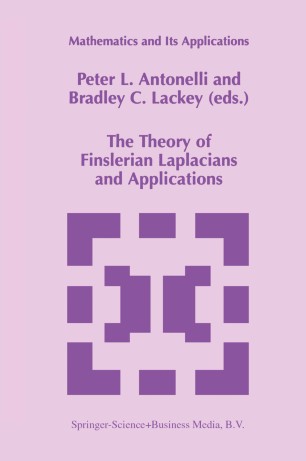 The Theory of Finslerian Laplacians and Applications

Part of the Mathematics and Its Applications book series (MAIA, volume 459)

Finslerian Laplacians have arisen from the demands of modelling the modern world. However, the roots of the Laplacian concept can be traced back to the sixteenth century. Its phylogeny and history are presented in the Prologue of this volume.
The text proper begins with a brief introduction to stochastically derived Finslerian Laplacians, facilitated by applications in ecology, epidemiology and evolutionary biology. The mathematical ideas are then fully presented in section II, with generalizations to Lagrange geometry following in section III. With section IV, the focus abruptly shifts to the local mean-value approach to Finslerian Laplacians and a Hodge-de Rham theory is developed for the representation on real cohomology classes by harmonic forms on the base manifold. Similar results are proved in sections II and IV, each from different perspectives.
Modern topics treated include nonlinear Laplacians, Bochner and Lichnerowicz vanishing theorems, Weitzenböck formulas, and Finslerian spinors and Dirac operators. The tools developed in this book will find uses in several areas of physics and engineering, but especially in the mechanics of inhomogeneous media, e.g. Cofferat continua.
Audience: This text will be of use to workers in stochastic processes, differential geometry, nonlinear analysis, epidemiology, ecology and evolution, as well as physics of the solid state and continua.