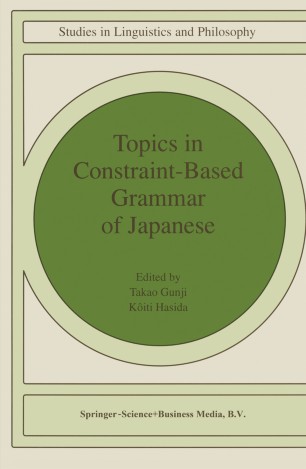 Topics in Constraint-Based Grammar of Japanese

Part of the Studies in Linguistics and Philosophy book series (SLAP, volume 68)

This collection of papers reports our attempt to sketch how Japanese grammar can be represented in a constraint-based formalism. Our first attempt of this nature appeared a decade ago as Japanese Phrase Structure Grammar (Gunji 1987) and in several papers following the publication of the book. This book has evolved from a technical memo that was a progress report on the Japanese phrase structure grammar (JPSG) project, which was conducted as an activity of the JPSG Working Group at ICOT (Institute for New-Generation Computing Technology) from 1984 to 1992. JPSG implements ideas from recent developments in phrase structure grammar formalism, such as head-driven phrase structure grammar (HPSG), (see Pollard & Sag 1987, 1994) as applied to the Japanese language. The main goal of this project was to state various grammatical regularities exhibited in natural language in general (and in Japanese in particular) as a set of local constraints. The book is organized in two parts. Part I gives an overview of developments in our framework after the publication of Gunji (1987), introducing our fundamental assumptions as well as discussing various aspects of Japanese in the constraint­ based formalism and summarizing discussions of the JPSG Working Group during the above-mentioned period. Naturally, in the period after the publication of the above book, our discussion was centered on topics not covered in the book.