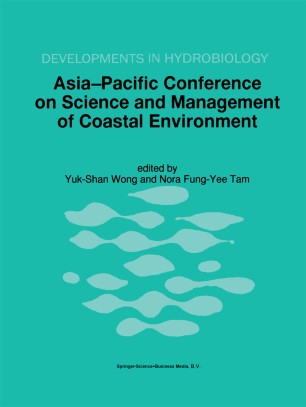 Asia-Pacific Conference on Science and Management of Coastal Environment

Proceedings of the International Conference held in Hong Kong, 25–28 June 1996

Part of the Developments in Hydrobiology book series (DIHY, volume 123)

Human beings have a long historical relationship with the coast. Initially it provided food and security, later forming important locations for industrial and commercial development. Now the emphasis has shifted towards leisure and conservation, although the former functions remain crucial. However, it is only very recently that people have started viewing the coast as a common and valuable resource that requires rational utilisation and scientific management in order to sustain its attractiveness. Of course, enlightened management comes only through understanding of the complicated coastal regions, which enables coastal managers to balance pressures from different sectors and to minimize risks. Scientific knowledge will continue to be the most important basis for resolving the conflicts between coastal users and interest groups such as developers and ecologists. Coastal management has also shifted from traditional restorative or remedial actions towards planned avoidance of other conflicts.
Despite rapid advancement in coastal sciences over recent decades, most of the major coastal issues have remained outstanding in the agenda. Control of shoreline erosion and protecting sea level rise continue to be crucial problems facing coastal scientists. Destructive coastal storms still cause tremendous damage, particularly in low altitudes. Wetland and estuary reclamation have led to the loss of the most valuable estuary wetlands which are required to sustain biological productivity and biodiversity.
This volume includes papers on marine and coastal pollution, eutrophication, aquaculture, conservation and utilization, coastal wetlands, and coastal zone management.