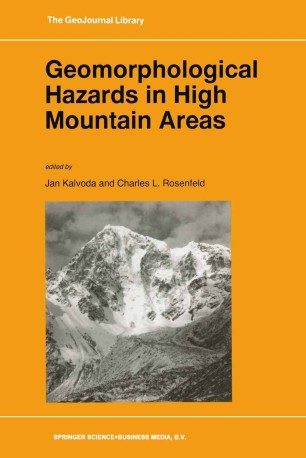 Part of the The GeoJournal Library book series (GEJL, volume 46)

On the basis of a total of thirteen case examples from the Tien Shan, Karakorum, Himalaya and Tangula Shan (central Tibet), the risk potential and hazards are inferred from the development of landscape during the Quaternary. The history of glaciers can be seen as of central importance for this. The Ice Age glacial erosion created V-shaped valleys, which with their steep flanks - as a consequence of the interglacial formation of V -valleys - have prepared and brought about landslides as well as rockslides and the hazards, combined with them. The same is true for the moraines, which the gla­ ciers have deposited high-up in the valley flanks and related loose stone deposits. Dry and wet mass movements follow after heavy precipitation, especially in the semi-arid investigation areas, and are catastrophes for the settlements and the communication routes in the valley floors. Their key-forms are debris cones and debris slopes, as well as mudflows and alluvial fans. In addition to the Ice Age glaciation history, as a preparatory, indirect factor, the Holocene to present glaciation history is, as a result of the danlming-up of glacier- and moraine lakes and their outbursts, a direct risk factor. The examples presented of acute and already occurred cases of damage were inves­ tigated in the years 1989-1994. Acknowledgements The authors wish to thank the Deutsche Forschungsgemeinschaft (DFG), the Max Planck-Gesellschaft (MPG), the Volkswagen-Stiftting (VW) and the Deutscher Aka­ demischer Austauschdienst (DAAD) for the financial support for the field-work.