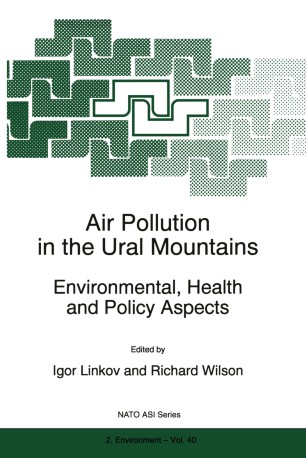 Air Pollution in the Ural Mountains

Mankind has created pollution, and has suffered its consequences since time immemorial. This has intesified greatly since the industrial revolution. One of the main problems in society, and a major function of government is how to cope with this pollution. 80 years ago the maxim used to be "the solution to pollution is dilution"; to dilute any pollted water supply in a large river, or to build a tall chimney stack to dilute air pollutants into the air so that concentrations of pollutants are always low. Since 1950 western countries have gone further and made major attempts to reduce the emissions of the most important pollutants. The discussion of what is an important pollutant has changed. To S02 and heavy metals such as cadmium or arsenic we now add fine particles and even (when we discuss global climate change) C02. The experience and practice of the western countries was only partly followed in the USSR (although the switch from use of coal to natural gas in major cities around 1970 was very important). Since the collapse of the USSR it has become fashionable both in the west and inside Russia to blame all society's ills on pollution. The statistics do not bear out that conclusion, but pollution remains an important issue which can be reduced without significant detriment to other societal values.