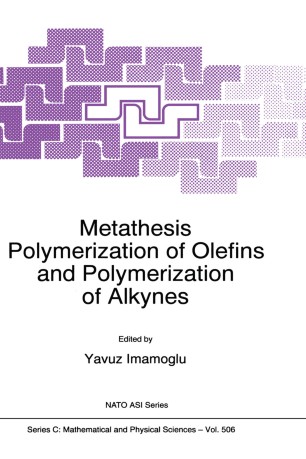 The first NATO Advanced Study Institute on Olefin Metathesis and Polymerization Catalysts was held on September 10-22, 1989 in Akcay, Turkey. Based on the fundamental research of RRSchrock, RGrubbs and K.B.Wagener in the field of ring opening metathesis polymerization (ROMP), acyclic diene metathesis (ADMET) and alkyne polymerization, these areas gained growing interest within the last years. Therefore the second NATO-ASI held on metathesis reactions was on Ring Opening Metathesis Po­ lymerization of Olefins and Polymerization of Alkynes on September 3-16, 1995 in Akcay, Turkey. The course joined inorganic, organic and polymer chemists to exchange their knowledge in this field. This volume contains the main and short lectures held in Akcay. To include ADMET reactions better into the title of this volume we changed it into: Metathesis Polymerization of Olefins and Alkyne Polymerization. This volume is addressed to research scientists, but also to those who start to work in the area of olefin metathesis and alkyne polymerization. The topics of the course were: mechanism of ROMP reactions/ new catalysts for ROMP/ new products by ROMP/ new catalysts for ADMET/ new products by ADMETI degradation of polymer by metathesis reactions/ alkyne polymerization and metathesis/ industrial application of metathesis reactions. The Advanced Study Institute was generously sponsored by the Scientific Affairs Division of NATO and the editor gratefully acknowledges this sponsorship. We also thank the Members of the Local Organizing Committee for their engagement on a successful NATO-AS!.