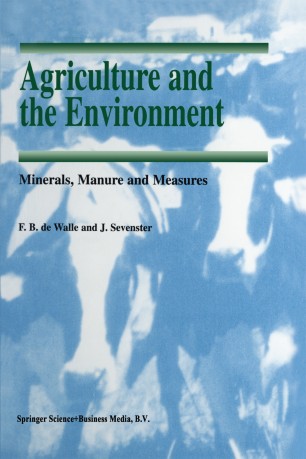 Agriculture and the Environment

In this study, an overview is presented of agricultural policies on manure and minerals, relating to the Nitrate Directive to remedy excessive surface- and groundwater contamination from intensive agricultural practices. Six countries belonging to the European Union were studied: the Netherlands, Belgium, Denmark, France, Germany and the United Kingdom. The policies and their legal incorporation were related to agricultural and environmental conditions in each country. In addition, an inventory was made of agricultural mineral poli­ cies in the United States and Canada. Conditions for livestock farming in North America differ considerably from those in Europe, but their solutions shed a different light on European policies. Research has shown that there are still very considerable mineral surpluses in many countries and regions. In both the Netherlands and in the Flemish part of Belgium, existing problems due to very high levels of manure production are structural rather than local and cannot easily be solved by transport of manure to other regions. To a lesser extent. Germany, Denmark and relatively small parts of France (Brittany) and the United Kingdom, still exceed the norms for an equilibrium fertilization. In Denmark, existing problems can probably be solved within the existing legislative framework. The Netherlands, Flanders. several German Lander (Nordrhein-Westfalen and Schleswig-Holstein) and Brittany.