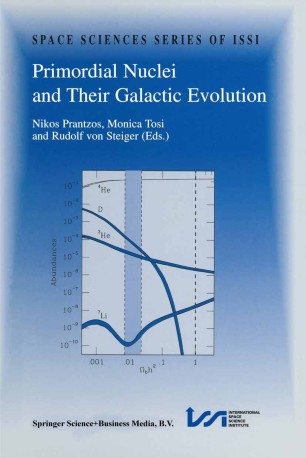 Primordial Nuclei and Their Galactic Evolution

Proceedings of an ISSI Workshop 6–10 May 1997, Bern, Switzerland

The present volume, the fourth one in the "Space Sciences Series of ISSI" (Inter­ national Space Science Institute), contains the proceedings of a workshop on "Pri­ mordial Nuclei and Their Galactic Evolution", which was held at ISSI in Bern on 6-10 May 1997. This topic was chosen following some general enquiries with the scientific community concerning its desirability and timeliness. Five convenors, D. Duncan, C. Hogan, J. Linsky, N. Prantzos, and H. Reeves (chair) subsequently set up the workshop, nominated a list of invitees, structured the workshop into a series of introductory talks and into six topical working groups (early Universe­ extragalactic objects -low-Z stars - galactic disk and galactic evolution - solar nebula -local interstellar medium), and described the tasks of the working groups in a list of keywords. It is the main task of ISSI to bring together space scientists, ground-based observers, and theorists from different fields and to give them the opportunity to discuss and compare their results, thus contributing to the achievement of a deeper understanding, adding value to those results through multi-disciplinary research in an atmosphere of international co-operation. In that spirit the convenors selected participants working in fields ranging from Big Bang theory to observers oftoday's Solar System, thus spanning the widest possible range both in time and space.