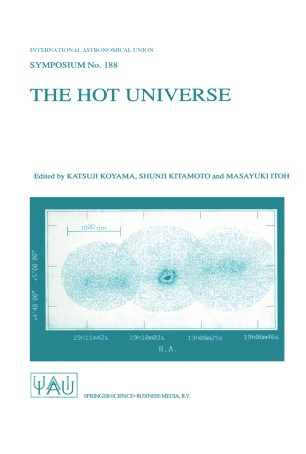 Proceedings of the 188th Symposium of the International Astronomical Union Held in Kyoto, Japan, August 26–30, 1997

The present decade is opening new frontiers in high-energy astrophysics. After the X-ray satellites in the 1980's, including Einstein, Tenma, EXOSAT and Ginga, several satellites are, or will soon be, simultaneously in orbit offering spectacular advances in X-ray imaging at low energies (ROSATj Yohkoh) as well as at high energies (GRANAT), in spectroscopy with increased bandwidth (ASCAj SAX), and in timing (XTE). While these satellites allow us to study atomic radiation from hot plasmas or energetic electrons, other satellites study nuclear radiation at gamma-ray energies (CGRO) associated with radioactivity or spallation reactions. These experiments show that the whole universe is emitting radiation at high energies, hence we call it the "hot universe. " The hot universe, preferentially emitting X- and gamma-rays, provides us with many surprises and much information. A symposium "The Hot Universe" was held in conjunction with the XXIIIrd General Assembly of the International Astronomical Union, at Kyoto on August 26-30 in 1997. The proceedings are organized as follows. Synthetic view of "the hot universe" is discussed in Section 1, "Plasma and Fresh Nucleosynthesis Phenomena". Timely discussions on the strategy for future missions "Future Space Program" are found in Section 2. Then the contents are divided into two major subjects: the compact objects and thin hot diffuse plasmas. Section 3 is devoted to the category of compact objects which includes white dwarfs, neutron stars, and gravitationally collapsed objects: stellar mass black holes or active galactic nuclei.