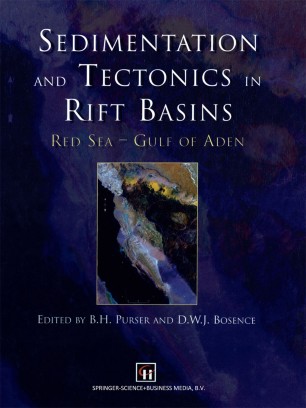 Sedimentation and Tectonics in Rift Basins: Red Sea - Gulf of Aden presents new case studies and synthesises the results of recent research on the sedimentological evolution of the Red Sea - Gulf of Aden rift system. This rift basin is generally regarded as the best natural geological laboratory in the world in which to study the processes of rift formation. Uplift of the rift margins in an arid climate results in extensive three-dimensional exposures of pre- and syn-rift strata and associated structures. These serve as analogues for the understanding and hydrocarbon exploration of deeper buried rift-systems on continental margins such as the North Sea and the Atlantic margins. The Red Sea - Gulf of Aden rift is also exceptional in that its stratigraphy spans all stages from pre-rift environments, syn-rift continental to marine environments through the rift to drift transition to post-rift sea-floor spreading.
The work is arranged in eight sections: following a review of the sedimentology and stratigraphy of rift basins, the magmatism and structural evolution of the Red Sea - Gulf of Aden rift is reviewed. Subsequently, new case studies are presented of the early rifting environment, syn-rift sedimentation, tectonics and diagenesis, evaporites and salt tectonics. Post-rift sediments of the axial trough are then discussed along with studies of reefs, coastal zone and shelf sediments, and the tectonic geomorphology of the rift margin escarpment.
This work results from extensive new research in the rift basin largely carried out under collaborative research projects by European and Middle Eastern geologists. It will be an invaluable reference work for geoscientists in the hydrocarbon, groundwater and mineral extraction industries, as well as for researchers in university departments of earth sciences, mining and physical geography.