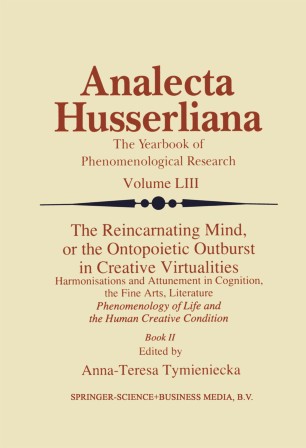 The Reincarnating Mind, or the Ontopoietic Outburst in Creative Virtualities

Harmonisations and Attunement in Cognition, the Fine Arts, Literature Phenomenology of Life and the Human Creative Condition (Book II)

Tymieniecka's phenomenology of life reverses current priorities, stressing the primogenital role of aesthetic enjoyment, rather than cognition, as typifying the Human Condition. The present collection offers clues to a crucial breakthrough in the perennial uncertainties about the powers and prerogatives of the human mind. It proposes human creativity as the pivot of the mind's genesis and its endowment. In the midst of the current defiance of the transcendental certainties of cognition, this turn to the creative act of the human being represents a radical reversion to an approach to human powers that is predominated by the aesthetic virtualities of the Human Condition. The collection lays down the foundations for a new discovery of the human mind, addressing the `plumbing' of the functional system that originates in the creative potentiality of the Human Condition, undercutting the currently prevalent empirical reductionism.