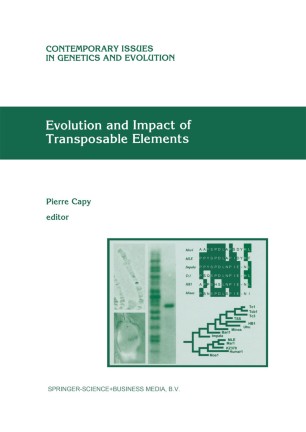 Evolution and Impact of Transposable Elements

Part of the Contemporary Issues in Genetics and Evolution book series (CIGE, volume 6)

During the last 50 years, the perception oftransposable elements (TEs) has changed considerably from selfish DNA to sequences that may contribute significantly to genome function and evolution. The recent increased interest in TEs is based on the realization that they are a major genetic component (at least 10--20%) of all organisms and a major contributor to the mutation process. It is currently estimated that 70--80% of spontaneous mutations are the result of TE-mediated insertions, deletions, or chromosomal rearrangements. Thus, it seems at least plausible that TEs may playa significant role in the adaptation and evolution of natural populations and species. The ubiquity of TEs suggests that they are an old component of genomes which have been vertically transmitted through generations over evolutionary time. However, detailed analyses carried out over the last 20 years have revealed several unusual features of TE evolution: (i) TEs can be horizontally transferred between species; (ii) TE evolutionary rates can be dramatically increased by specific inactivation processes, such as the RIP (Repeat Induced Point mutation) mechanism in fungi; (iii) TEs can influence the regulation of other TEs by insertion or deletion; (iv) different classes of TEs in even distantly related species can be remarkably similar in both structure and function.