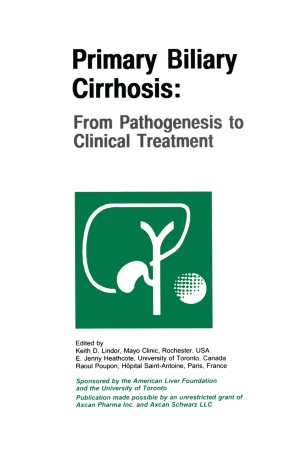 From Pathogenesis to Clinical Treatment

The condition of prolonged obstructive jaundice with patent bile ducts was first described in 1851 by Addison and Gull of Guy's Hospital, London. The term primary biliary cirrhosis (PBC) was defined in 1950 by Ahrens and colleagues of the Rockefeller Institute, New York. The condition was considered rare but this changed in 1965 with the discovery of a definitive diagnostic serum mitochondrial antibody test and the recognition that a raised serum alkaline phosphatase value, often discovered incidentally, could be a diagnostic pointer. If the diagnosis is made earlier, the end stages are rarely reached as death is replaced by liver transplantation. On November 6th 1997, in Chicago, an International Faculty discussed in depth the clinical features, pathogenesis and treatment of PBC, no longer considered a rare disease. The course of PBC is long, but some 18 years after the discovery of a positive mitochondrial antibody test in a symptom­ free patient with normal serum biochemistry, 83% will have developed abnormal tests and 76% will be symptomatic. Identification of those who will progress rapidly is difficult. The serum antimitochondrial profile may be useful but this is a very specialist technique. Mathematical prognostic models are useful in therapeutic trials and in the selection and timing of patients for liver transplantation but have limited value in individual patients. An increasing serum bilirubin level remains the most important indicator of rapid progression. Its value however can be negated by the use of ursodeoxycholic acid which has a bilirubin-lowering effect.