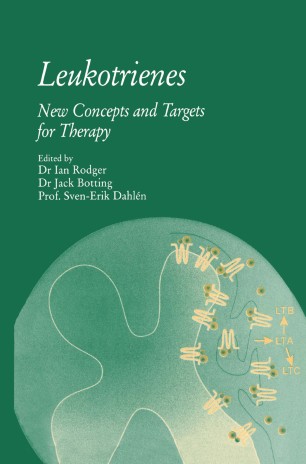 New Concepts and Targets for Therapy

In the two decades since the elusive "slow reacting substance of anaphylaxis" (SRS-A) was identified as a product of the action of the 5-lipoxygenase enzyme on arachidonic acid, it has been well established that the leukotrienes are key mediators of both alIergy and inflammation. Their release by alIergen or other challenge has been demonstrated in the lungs of asthmatic subjects, and measurement of urinary leukotriene concentrations in such patients has been shown to be a valuable, non­ invasive indicator. Significant progress has been made towards the characterization of the leukotriene receptor subtypes, exemplified by the cloning of the LTB4 receptor earlier this year. Coupled with this there has been a continued elucidation of signal transduction mechanisms underlying receptor activation. Consequent upon these advances has been the development of potent antagonists of the CysLT receptor, J and both these and inhibitors of leukotriene biosynthesis have entered clinical practice in the therapy of asthma. In this clinical setting antagonists of the CysLTJ receptor have been shown to be an effective therapy in chronic asthmatics, against antigen- and exercise-induced bronchoconstriction, and in aspirin-intolerant asthmatics. The advent of this new class of agents promises to change the way in which asthmatic patients are currently treated.

Jack Botting is Consultant at the William Harvey Research Institute, an independent charitable foundation within Queen Mary and Westfield College of the University of London, UK.