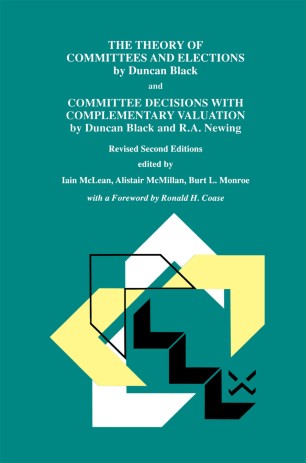 R. H. Coase Duncan Black was a close and dear friend. A man of great simplicity, un­ worldly, modest, diffident, with no pretensions, he was devoted to scholarship. In his single-minded search for the truth, he is an example to us all. Black's first degree at the University of Glasgow was in mathematics and physics. Mathematics as taught at Glasgow seems to have been designed for engineers and did not excite him and he switched to economics, which he found more congenial. But it was not in a lecture in economics but in one on politics that he found his star. One lecturer, A. K. White, discussed the possibility of constructing a pure science of politics. This question caught his imagination, perhaps because of his earlier training in physics, and it came to absorb his thoughts for the rest of his life. But almost certainly nothing would have come of it were it not for his appointment to the newly formed Dundee School of Economics where the rest of the. teaching staff came from the London School of Economics. At Glasgow, economics, as in the time of Adam Smith, was linked with moral philosophy. At Dundee, Black was introduced to the analytical x The Theory o/Committees and Elections approach dominant at the London School of Economics. This gave him the approach he used in his attempt to construct a pure science of politics.