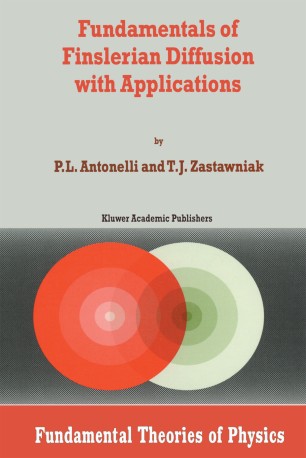 Fundamentals of Finslerian Diffusion with Applications

The erratic motion of pollen grains and other tiny particles suspended in liquid is known as Brownian motion, after its discoverer, Robert Brown, a botanist who worked in 1828, in London. He turned over the problem of why this motion occurred to physicists who were investigating kinetic theory and thermodynamics; at a time when the existence of molecules had yet to be established. In 1900, Henri Poincare lectured on this topic to the 1900 International Congress of Physicists, in Paris [Wic95]. At this time, Louis Bachelier, a thesis student of Poincare, made a monumental breakthrough with his Theory of Stock Market Fluctuations, which is still studied today, [Co064]. Norbert Wiener (1923), who was first to formulate a rigorous concept of the Brownian path, is most often cited by mathematicians as the father of the subject, while physicists will cite A. Einstein (1905) and M. Smoluchowski. Both considered Markov diffusions and realized that Brownian behaviour nd could be formulated in terms of parabolic 2 order linear p. d. e. 'so Further­ more, from this perspective, the covariance of changes in position could be allowed to depend on the position itself, according to the invariant form of the diffusion introduced by Kolmogorov in 1937, [KoI37]. Thus, any time­ homogeneous Markov diffusion could be written in terms of the Laplacian, intrinsically given by the symbol (covariance) of the p. d. e. , plus a drift vec­ tor. The theory was further advanced in 1949, when K.