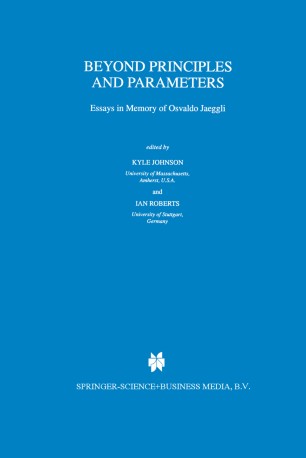 Beyond Principles and Parameters

Essays in Memory of Osvaldo Jaeggli

Kyle Johnson University of Massachusetts at Amherst Ian Roberts University of Stuttgart An important chapter in the history of syntactic theory opened as the 70's reached their close. The revolution that Chomsky had brought to linguistics had to this point engendered theories which remained within the grip of the philologists' construction-based vision. Their image of language as a catalogue of independent constructions served as the backdrop against which much of transformational grammar's detailed exploration evolved. In a sense, the highly successful pursuit of th phonology and morphology in the 19 century as compared to the absence of similar results in syntax (beyond observations such as Wackemagel's Law, etc. ) attests to this: just noting that, for example, French relative clauses allow subject-postposing but not preposition-stranding while English relatives do not allow the former but do allow the latter does not take us far beyond a simple record of the facts. Prior to this point, th syntactic theory had not progressed beyond the 19 century situation. But as the 80's approached, this image began to give way to a different one: grammar as a puzzle of interlocking "modules," each made up of syntactic principles which cross-cut the philologist's constructions. More and more, "constructions" decomposed into the epiphenomenal interplay of encapsulated mini-theories: X Theory, Binding Theory, Bounding Theory, Case Theory, Theta Theory, and so on. Syntactic analyses became reoriented toward the twin goals of identifying the content of these modules and deconstructing into them the descriptive results of early transformational grammar.