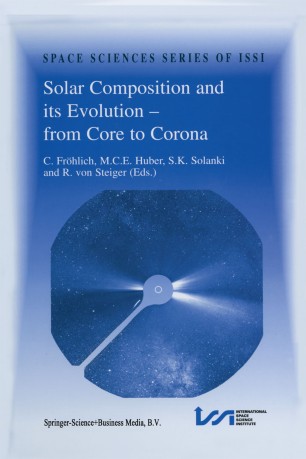 Solar Composition and its Evolution — from Core to Corona

The discovery of chemical elements in celestial bodies and the first estimates of the chemical composition of the solar atmosphere were early results of Astrophysics - the subdiscipline of Astronomy that was originally concerned with the general laws of radiation and with spectroscopy. Following the initial quantitative abundance studies by Henry Norris Russell and by Cecilia Payne-Gaposchkin, a tremendous amount of theoretical, observa­ tional, laboratory and computational work led to a steadily improving body of knowledge of photospheric abundances - a body of knowledge that served to guide the theory of stellar evolution. Solar abundances determined from photospheric spectra, together with the very similar abundances determined from carbonaceous chondrites (where extensive information on isotopic composition is available as well), are nowadays the reference for all cosmic composition measures. Early astrophysical studies of the solar photospheric composition made use of atmosphere models and atomic data. Consistent abundances derived from different atmospheric layers and from lines of different strength helped to confirm and estab­ lish both models and atomic data, and eventually led to the now accepted, so-called "absolute" abundance values - which, for practical reasons, however, are usually given relative to the number of hydrogen nuclei.