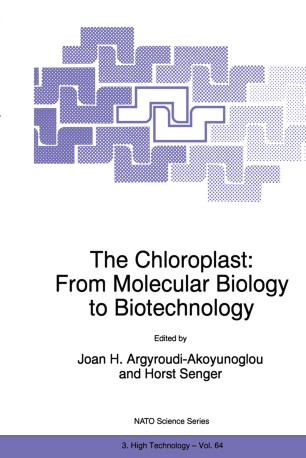 The Chloroplast: From Molecular Biology to Biotechnology

From August 10 to August 15, 1998, an international Advanced Research Workshop-Lecture Course on The chloroplast: from Molecular Biology to Biotechnology was held at the Orthodox Academy of Crete, Kolymbari-Chania, on the island of Crete, Greece. After five previous meetings on the chloroplast topic in Marburg (1975), Spetses (1978), Rhodos (1985), Aghia Pelaghia, Crete (1991) and Marburg (1995) this conference proved again that chloroplast research is continuously in the focus of intensive research interest. The meeting, sponsored by NATO and supported by the Federation of the European Societies for Plant Physiology (FESPP) and the Greek Ministry of Development (General Secretariat of Research and Development), was held under the auspices of the International Society for Chloroplast Development and the National Center for Scientific Research "Demokritos", Athens-Greece. Aim of the workshop was to bring together experts and students from different disciplines, coming from various countries around the world, studying chloroplast biogenesis from different perspectives in an effort to propose biotechnological approaches, via genetic manipulation of the organelle, applicable in solving problems of economic importance. Ninety scientists (including observers) coming from 19 countries actively participated and discussed recent advances in the field. During the meeting it became clear that as a result of the progress made in molecular biology, including genomic sequence, and in biochemistry over recent years, this exciting field of chloroplast development is continuously promoted by renewed interest in as yet unsolved but very important questions.