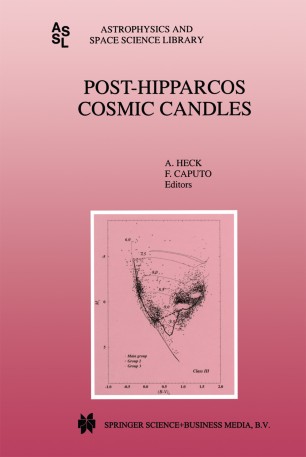 In May 1976, when one of us was temporarily associated with Stras­ bourg Observatory for lecturing on distance determination methods (Heck 1978), Pierre Lacroute - then in his last year as Director there - mod­ estly requested comments on a project he had been cherishing for quite a few years, and which he had been presenting to visitors and colleagues: an astrometric satellite. His persuasiveness and persistence won support from the scientific com­ munity, from the French space agency CNES and from the European Space Agency (ESA): the Hipparcos satellite was born. It was fitting that Lacroute lived long enough after his retirement to attend the launch of his brainchild in 1989 and to see it successfully operational. He knew however he would not enjoy the completion of this long and ambitious mission (he passed away on 14 January 1993, a few days before reaching the age of 87). In May 1997, in the prestigious setting of San Giorgio :Maggiore in Venice, ESA organized a symposium celebrating the presentation of the Hipparcos and Tycho catalogues. That conference signalled also the re­ lease of the first scientific results based at least partially on Hipparcos data. An impressive proceedings volume (Battrick 1997) of more than nine hundred pages, gathering together almost two hundred contributions, gave evidence of numerous studies in progress, in addition to papers starting to appear in the classical journals. The well-maintained ESA Hipparcos web site (http://astro. estec. esa.