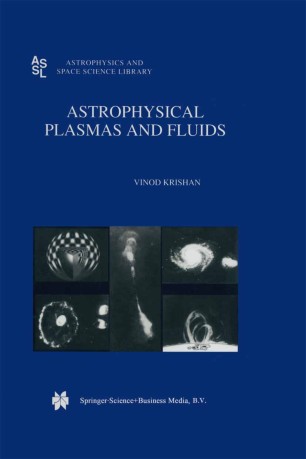 Life was simple when the dynamic, the spectral and the resolving powers of our instruments were small. One observed whole objects - planets, stars, sunspots, galaxies, often in rainbow colours. Then the revolution occurred: we acquired the centimetric eyes, the mil­ limetric eyes, the infrared eyes, the ultraviolet eyes, the X-ray eyes and the ,-ray eyes. With these we see mottles on the surface of stars, streams in sunspots, and spirals in nuclei of galaxies. We see regions of multiple mass densities and temperatures in a precari­ ous balance, losing it occasionally, exhaling flares. The universe is timed, cosmic phenomena are clocked; eternity is lost and variabil­ ity is bought. Microarcsecond resolutions revealed stirring and siz­ zling interiors underneath serene surfaces. Short durations and small scales demanded employing a discipline with similar attributes - the discipline of Plasmas and Fluids - known more for its complexity than for its felicity. Some would like to wish it away. We shall learn about plasmas for it is too little familiarity that breeds fear. Complexity can be systemized, to a large extent, by looking for a common denominator among apparently disparate phe­ nomena. It is not immediately obvious what the contents and the style of a graduate level course on plasmas and fluids aimed at understanding astrophysical phenomena should be. Plasmas and fluids are huge subjects by themselves. The cosmic phenomena where plasmas and fluids playa definite role are equally diverse and numerous.