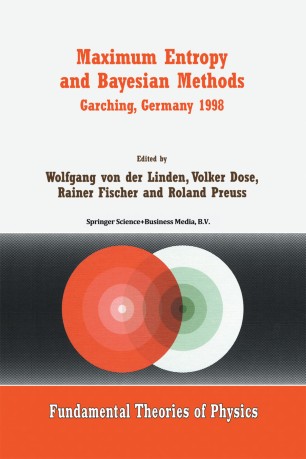 In 1978 Edwin T. Jaynes and Myron Tribus initiated a series of workshops to exchange ideas and recent developments in technical aspects and applications of Bayesian probability theory. The first workshop was held at the University of Wyoming in 1981 organized by C.R. Smith and W.T. Grandy. Due to its success, the workshop was held annually during the last 18 years. Over the years, the emphasis of the workshop shifted gradually from fundamental concepts of Bayesian probability theory to increasingly realistic and challenging applications. The 18th international workshop on Maximum Entropy and Bayesian Methods was held in Garching / Munich (Germany) (27-31. July 1998). Opening lectures by G. Larry Bretthorst and by Myron Tribus were dedicated to one of th the pioneers of Bayesian probability theory who died on the 30 of April 1998: Edwin Thompson Jaynes. Jaynes revealed and advocated the correct meaning of 'probability' as the state of knowledge rather than a physical property. This inter­ pretation allowed him to unravel longstanding mysteries and paradoxes. Bayesian probability theory, "the logic of science" - as E.T. Jaynes called it - provides the framework to make the best possible scientific inference given all available exper­ imental and theoretical information. We gratefully acknowledge the efforts of Tribus and Bretthorst in commemorating the outstanding contributions of E.T. Jaynes to the development of probability theory.