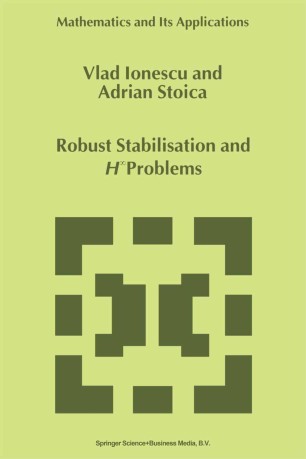 Part of the Mathematics and Its Applications book series (MAIA, volume 482)

OO It is a matter of general consensus that in the last decade the H _ optimization for robust control has dominated the research effort in control systems theory. Much attention has been paid equally to the mathematical instrumentation and the computational aspects. There are several excellent monographs that cover the standard topics in the area. Among the recent issues we have to cite here Linear Robust Control authored by Green and Limebeer (Prentice Hall 1995), Robust Controller Design Using Normalized Coprime Factor Plant Descriptions - by McFarlane and Glover (Springer Verlag 1989), Robust and Optimal Control - by Zhou, Doyle and Glover (Prentice Hall 1996). Thus, when the authors of the present monograph decided to start the work they were confronted with a very rich literature on the subject. However two reasons motivated their initiative. The first concerns the theory in which the whole development of the book was embedded. As is well known, there are several ways of approach­ oo ing H and robust control theory. Here we mention three relevant direc­ tions chronologically ordered: a) the first makes use of a generalization of the Beurling-Lax theorem to Krein spaces; b) the second makes use of a generalization of Nevanlinna-Pick interpolation theory and commutant lifting theorem; c) the third, and probably the most attractive from an el­ evate engineering viewpoint, is the two Riccati equations based approach which offers a complete solution in state space form.