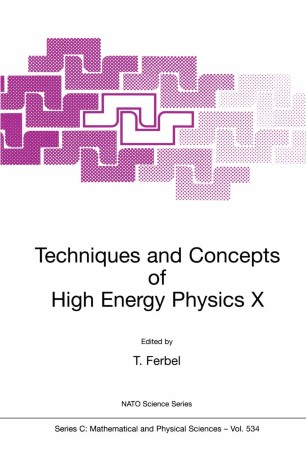 The Proceedings of the tenth Advanced Study Institute (ASI) on Tech­ niques and Concepts of High Energy Physics are dedicated to Jane and Bob Wilson. Jane joined Bob at St. Croix for the first session of this Institute, after Bob had stepped down as director of Fermilab, and was scheming to build a modest charm factory in the parking lot of Columbia University's Nevis Laboratory. Through the years, Bob has been a great friend of the School, and much of its success and flavor can be attributed to his guidance and support. The 1998 meeting was held once again at the Hotel on the Cay, and, as before, the work and the fun went on very enjoyably. We had a to­ tal of 76 participants from 23 countries, with the main financial support for the meeting provided by the Scientific Affairs Division of the North Atlantic Treaty Organization (NATO). The ASI was co-sponsored by the U. S. Department of Energy, by the Fermi National Accelerator Laboratory (Fermilab), by the U.S. National Science Foundation, and by the University of Rochester. As in the case of the previous ASIs, the scientific program was designed for advanced graduate students and recent PhD recipients in experimental particle physics. The present volume of lectures should complement and update the material published (by Plenum) for the first nine ASIs and prove to be of value to a wider audience of physicists.