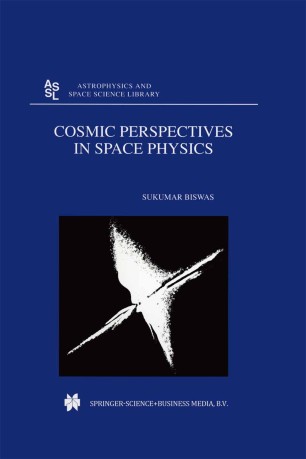 In the early years of the twentieth century, Victor Hess of Germany flew instruments in balloons and so discovered in 1912 that an extra-~errestial radiation of unknown origin is incident on the earth with an almost constant intensity at all times. These penetrating non­ solar radiations which were called Cosmic Rays by Millikan, USA, opened the new frontier of space physics and many leading scientists were attracted to it. At the end of World War II a number of space vehicles, e.g. stratospheric balloons, rockets and satellites were developed. In 1950 and onwards, these vehicles enabled spectacular advances in space physics and space astrophysics. New horizons were opened in the explorations of cosmic rays, the earth's magnetosphere, the Sun and the heliosphere, the moon and the planets. Using space-borne instruments, exciting discoveries were made of stars, and galaxies in the infra-red, ultra violet, x-ray and gamma-ray wavelengths. In this text book these fascinating new findings are presented in depth and on a level suitable for senior undergraduate and graduate students, research scientists and scientists of other disciplines. Although there are several excellent books and monographs on different aspects, most of these deal with specific areas. In this text book the findings of space physics and astrophysics are presented in an integrated manner with proper introductions to the fundamental aspects, and these are supplemented by relevant ground based observations.