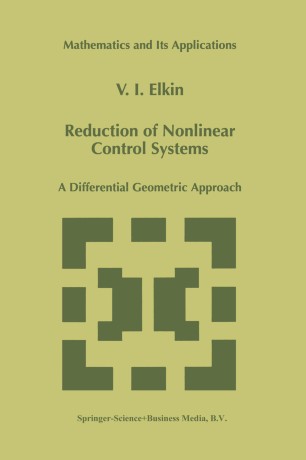 Part of the Mathematics and Its Applications book series (MAIA, volume 472)

Advances in science and technology necessitate the use of increasingly-complicated dynamic control processes. Undoubtedly, sophisticated mathematical models are also concurrently elaborated for these processes. In particular, linear dynamic control systems iJ = Ay + Bu, y E M C ]Rn, U E ]RT, (1) where A and B are constants, are often abandoned in favor of nonlinear dynamic control systems (2) which, in addition, contain a large number of equations. The solution of problems for multidimensional nonlinear control systems en­ counters serious difficulties, which are both mathematical and technical in nature. Therefore it is imperative to develop methods of reduction of nonlinear systems to a simpler form, for example, decomposition into systems of lesser dimension. Approaches to reduction are diverse, in particular, techniques based on approxi­ mation methods. In this monograph, we elaborate the most natural and obvious (in our opinion) approach, which is essentially inherent in any theory of math­ ematical entities, for instance, in the theory of linear spaces, theory of groups, etc. Reduction in our interpretation is based on assigning to the initial object an isomorphic object, a quotient object, and a subobject. In the theory of linear spaces, for instance, reduction consists in reducing to an isomorphic linear space, quotient space, and subspace. Strictly speaking, the exposition of any mathemat­ ical theory essentially begins with the introduction of these reduced objects and determination of their basic properties in relation to the initial object.