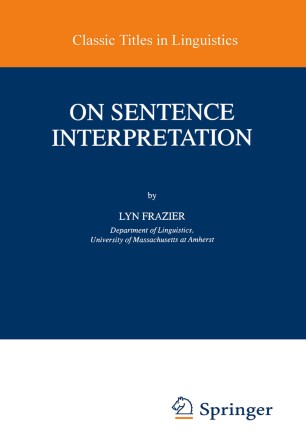 At present there exists no empirically-motivated theory of how perceivers assign a grammatically-permissible interpretation to a sentence. Implicit in many investigations of language comprehension is the idea that each constituent of a sentence is interpreted by the perceiver at the earliest conceivable point, using all potentially relevant sources of information. A variety of counter examples are presented to argue against this implicit theory of sentence interpretation. It is argued that an explicit alternative theory is needed to specify which decisions are made at which points during interpretive processing and to spell out the principles governing the processor's preferred choice at points of ambiguity or uncertainty. Several specific issues are taken concerning how the processor assigns a focal structure to an input sentence, how it identifies the topic of the sentence, how implicit restrictors on the domain of quantification are interpreted and how the identification of the content of a restrictor may guide the processor's use of discourse information. Exploiting intuitions about preferred interpretations of ambiguous sentences as well as the results of both old and new experimental studies, a theory of the preferred interpretation of Determiner Phrases is presented. This work explores important, but overlooked questions in on-line sentence interpretation and attempts to erect some of the scaffolding for an eventual theory of sentence interpretation.