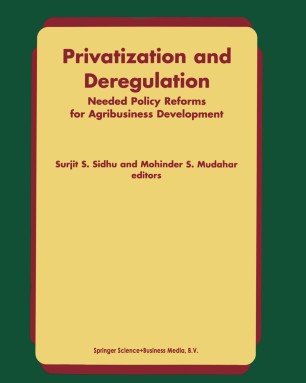 Agribusiness development has been constrained by distorted economic policies and institutional controls in the emerging market economies and in most of the developing countries. In the former Soviet Union and Eastern Europe, the agribusiness complex was dominated by state-owned enter­ prises. In many of the developing countries, economic policies discriminated against agriculture and agribusiness. The results have been obvious. Despite major technological advances, agriculture and agribusiness sectors in these economies remained inefficient. A large share of the population, particu­ larly in the rural areas, has not been able to improve household incomes and living standards. The final decade of the 20th century will certainly be recorded as one of the most dynamic in modem history. The restructuring of the former Soviet Union and Eastern Europe and market reforms in many of the developing countries are progressing at a rapid pace. Agribusiness is key to economic perfor­ mance in these areas in that agriculture is an important sector in many of these economies. Economic transition to a market economy is presenting many challenges and opportunities to accelerate the process of agribusiness development, which is so essential to alleviate rural poverty. An international symposium, organized by the International Fertilizer Development Center (IFDC), provided a unique opportunity to discuss needed policy reforms to promote efficient and competitive agribusiness develop­ ment, with a particular focus on privatization and deregulation.