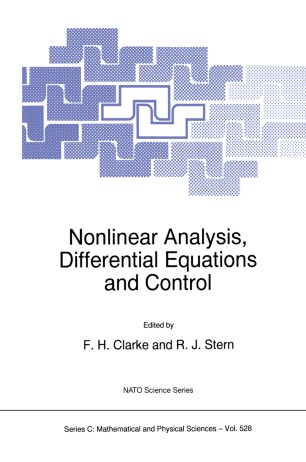 Recent years have witnessed important developments in those areas of the mathematical sciences where the basic model under study is a dynamical system such as a differential equation or control process. Many of these recent advances were made possible by parallel developments in nonlinear and nonsmooth analysis. The latter subjects, in general terms, encompass differential analysis and optimization theory in the absence of traditional linearity, convexity or smoothness assumptions. In the last three decades it has become increasingly recognized that nonlinear and nonsmooth behavior is naturally present and prevalent in dynamical models, and is therefore significant theoretically. This point of view has guided us in the organizational aspects of this ASI. Our goals were twofold: We intended to achieve "cross fertilization" between mathematicians who were working in a diverse range of problem areas, but who all shared an interest in nonlinear and nonsmooth analysis. More importantly, it was our goal to expose a young international audience (mainly graduate students and recent Ph. D. 's) to these important subjects. In that regard, there were heavy pedagogical demands placed upon the twelve speakers of the ASI, in meeting the needs of such a gathering. The talks, while exposing current areas of research activity, were required to be as introductory and comprehensive as possible. It is our belief that these goals were achieved, and that these proceedings bear this out. Each of the twelve speakers presented a mini-course of four or five hours duration.