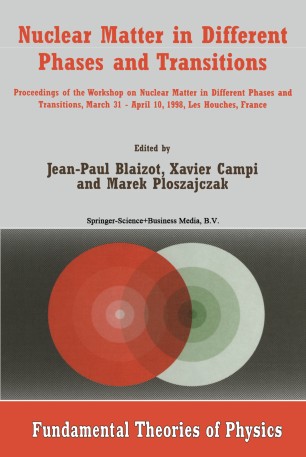 Nuclei in their ground states behave as quantum fluids, Fermi liquids. When the density, or the temperature of that fluid increases, various phase transitions may occur. Thus, for moderate excitation energies, of the order of a few MeV per nucleon, nuclear matter behaves as an ordinary fluid with gaseous and liquid phases, and a coexistence region below a critical temperature. For higher excitation energies, of the order of a few Ge V per nucleon, the composition of nuclear matter changes, nucleons being gradually turned into baryonic resonances of various kinds. Finally, when 3 the energy density exceeds some few GeV /fm , nuclear matter turns into a gas of weakly interacting quarks and gluons. This new phase of matter has been called the quark-gluon plasma, and its existence is a prediction of Quantum Chromodynamics. Collisions of heavy ions produce nuclear matter with various degrees of excitation. In fact, by selecting the impact parameter and the bombarding energy, one can produce nuclear matter with specified baryonic density and excitation energy. Several major experimental programs are under way (for instance at GANIL, with the detector INDRA, at GSI with the detector ALADIN, at the CERN-SPS, at the AGS of Brookhaven, etc. ), or are in preparation (RRIC, LHC, etc. ). The goal of these experiments is to get evidence for the different phases of nuclear matter predicted by the theory, and to study their properties.