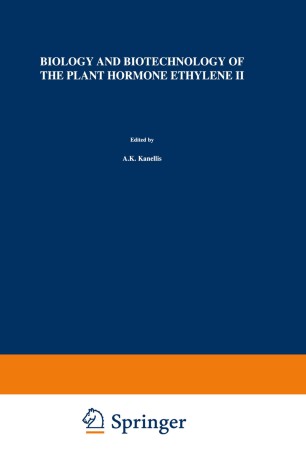 Biology and Biotechnology of the Plant Hormone Ethylene II

The inflorescence of the monoecious maize plant is unique among the Gramineae in the sharp separation of the male and female structures. The male tassel at the terminus of the plant most often sheds pollen before the visual appearance of the receptive silks of th the female ear at a lateral bud, normally at the 10 leaf [I]. Earlier studies examined the ontogeny of the growing tissues beginning with the embryo in the kernel through to the obvious protuberances of the growing point as the kernel germinates. The differentiated developing soon-to-become tassel and the lateral bulges that develop into the ears on the lateral buds become apparent very early in the germinating kernel [2, 3, 46]. A certain number of cells are destined for tassel and ear development [8]. As the plant develops, there is a phase transition [\3, 16] from the vegetative lateral buds to the reproductive lateral buds. This change in phase has been ascribed to genotypic control as evidenced in the differences among different genotypes in the initiation of the reproductive [I]. The genetic control of tassel and ear initiation has been gleaned from anatomical observations. Lejeune and Bernier [I2] found that maize plants terminate the initiation of additional axillary meristems at the time of tassel initiation. This would indicate that the top-most ear shoot is initiated on the same day as the initiation of tassel development and this event signals the end of the undifferentiated growing point.