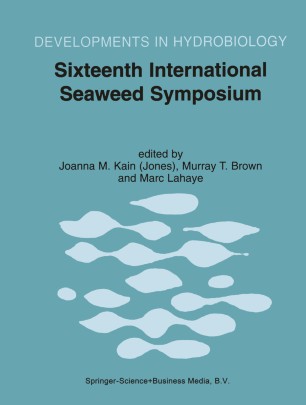 Part of the Developments in Hydrobiology book series (DIHY, volume 137)

International Seaweed Symposia have been held at three-year intervals for nearly 50 years. In the early days they formed the only international forum for marine phycologists, and although there are now frequent phycological meetings their value has not diminished, both because of the increased commercial importance of seaweeds, and because of the unique mix of disciplines that the meetings attract. Industrialists interact with chemists and biologists with the common aim of understanding seaweeds. The main development during the last few decades has been an increase in the cultivation of algae, as natural stocks of the useful species become depleted. Of the first ten Symposia, nine were held in western countries where seaweed cultivation is almost non-existent. It is appropriate that the last two have been held where algal exploitation is relatively big business.
The popularity of the Symposia with scientists has meant that the standard of presentation has always been high. Many participants from the countries with the highest economic involvement with seaweeds frequently publish in their own languages so their contributions give considerable additional interest to the Proceedings.
The Philippines, with its extensive coastline, much of which supports seaweed exploitation and cultivation, was an excellent venue for the latest Symposium. The papers presented in this volume reflect the continuing world-wide interest in marine algae and range from results using cutting-edge laboratory techniques to simple but important field observations.