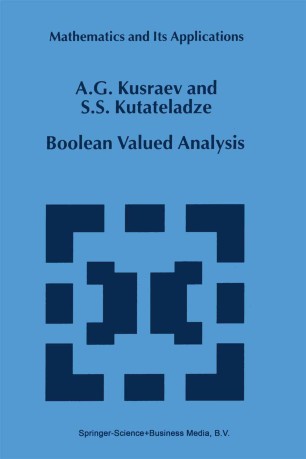 Part of the Mathematics and Its Applications book series (MAIA, volume 494)

Boolean valued analysis is a technique for studying properties of an arbitrary mathematical object by comparing its representations in two different set-theoretic models whose construction utilises principally distinct Boolean algebras. The use of two models for studying a single object is a characteristic of the so-called non-standard methods of analysis. Application of Boolean valued models to problems of analysis rests ultimately on the procedures of ascending and descending, the two natural functors acting between a new Boolean valued universe and the von Neumann universe.

This book demonstrates the main advantages of Boolean valued analysis which provides the tools for transforming, for example, function spaces to subsets of the reals, operators to functionals, and vector-functions to numerical mappings. Boolean valued representations of algebraic systems, Banach spaces, and involutive algebras are examined thoroughly.

Audience: This volume is intended for classical analysts seeking powerful new tools, and for model theorists in search of challenging applications of nonstandard models.