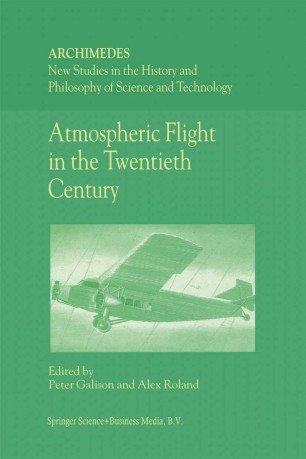 Atmospheric Flight in the Twentieth Century

All technologies differ from one another. They are as varied as humanity's interaction with the physical world. Even people attempting to do the same thing produce multiple technologies. For example, John H. White discovered more than l 1000 patents in the 19th century for locomotive smokestacks. Yet all technologies are processes by which humans seek to control their physical environment and bend nature to their purposes. All technologies are alike. The tension between likeness and difference runs through this collection of papers. All focus on atmospheric flight, a twentieth-century phenomenon. But they approach the topic from different disciplinary perspectives. They ask disparate questions. And they work from distinct agendas. Collectively they help to explain what is different about aviation - how it differs from other technologies and how flight itself has varied from one time and place to another. The importance of this topic is manifest. Flight is one of the defining technologies of the twentieth century. Jay David Bolter argues in Turing's Man that certain technologies in certain ages have had the power not only to transform society but also to shape the way in which people understand their relationship with the physical world. "A defining technology," says Bolter, "resembles a magnifying glass, which collects and focuses seemingly disparate ideas in a culture into one bright, sometimes piercing ray." 2 Flight has done that for the twentieth century.

`Atmospheric Flight is a fascinating collection of essays and case studies on the various aspects of aviation history and advancements in flight technology in the 20th century. The essays are all well written with excellent illustrations and photographs. Because this reviewer's background is in airport planning and design, he particularly enjoyed D.G. Douglas's essay "Who Designs Airports...." The introduction and epilogue provide an excellent framework for the essays. The book will be most interesting for researchers who are searching for some of the historical aspects of aviation. Upper-division undergraduates through professionals.'
W.J. Sproule, Michigan Technological University in Choice, 38:4 (2000)
Buy options