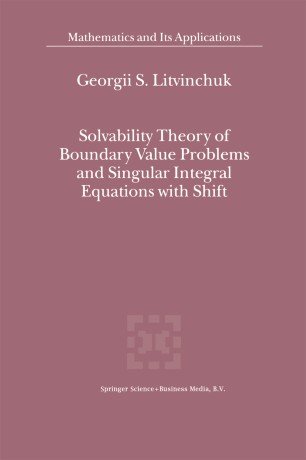 Part of the Mathematics and Its Applications book series (MAIA, volume 523)

The first formulations of linear boundary value problems for analytic functions were due to Riemann (1857). In particular, such problems exhibit as boundary conditions relations among values of the unknown analytic functions which have to be evaluated at different points of the boundary. Singular integral equations with a shift are connected with such boundary value problems in a natural way. Subsequent to Riemann's work, D. Hilbert (1905), C. Haseman (1907) and T. Carleman (1932) also considered problems of this type. About 50 years ago, Soviet mathematicians began a systematic study of these topics. The first works were carried out in Tbilisi by D. Kveselava (1946-1948). Afterwards, this theory developed further in Tbilisi as well as in other Soviet scientific centers (Rostov on Don, Ka­ zan, Minsk, Odessa, Kishinev, Dushanbe, Novosibirsk, Baku and others). Beginning in the 1960s, some works on this subject appeared systematically in other countries, e. g. , China, Poland, Germany, Vietnam and Korea. In the last decade the geography of investigations on singular integral operators with shift expanded significantly to include such countries as the USA, Portugal and Mexico. It is no longer easy to enumerate the names of the all mathematicians who made contributions to this theory. Beginning in 1957, the author also took part in these developments. Up to the present, more than 600 publications on these topics have appeared.