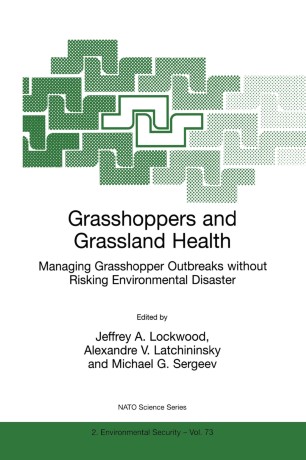 Acridids (grasshoppers and locusts) can range from being rare curiosities to abundant menaces. Some are threatened with extinction and become subjects of intensive conservation efforts, while others are devastating pests and become the objects of massive control programmes. Even within a species, there are times when the animal is so abundant that its crushed masses cause the wheels of trains to skid (the Rocky Mountain grasshopper, Melanoplus spretus Walsh in western North America in the 1860s and I 870s), while at other times the animal is alarmingly scarce (the Rocky Mountain grasshopper went extinct in the early 1900s). Why are there these extremes in one insect family, and even in a single species? The NATO workshop examined this paradox and its implications for Environmental Security, which must address both the elements of land use (agricultural production and pest management) and conservation of biodiversity. The reconciliation of these objectives clearly demands a critical assessment of current knowledge and policies, identification of future research, and close working relationships among scientists. Insects can present two clear faces, as well as the intervening gradation. These extremes require us to respond in two ways: conservation of scarce species and suppression of abundant (harmful) species. But perhaps most important, these opposite poles also provide the opportunity for an exchange of information and insight.