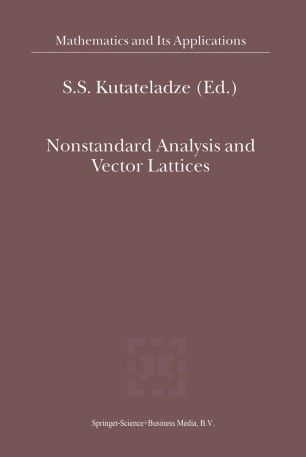 Part of the Mathematics and Its Applications book series (MAIA, volume 525)

Nonstandard methods of analysis consist generally in comparative study of two interpretations of a mathematical claim or construction given as a formal symbolic expression by means of two different set-theoretic models: one, a "standard" model and the other, a "nonstandard" model. The second half of the twentieth century is a period of significant progress in these methods and their rapid development in a few directions. The first of the latter appears often under the name coined by its inventor, A. Robinson. This memorable but slightly presumptuous and defiant term, non­ standard analysis, often swaps places with the term Robinsonian or classical non­ standard analysis. The characteristic feature of Robinsonian analysis is a frequent usage of many controversial concepts appealing to the actual infinitely small and infinitely large quantities that have resided happily in natural sciences from ancient times but were strictly forbidden in modern mathematics for many decades. The present-day achievements revive the forgotten term infinitesimal analysis which reminds us expressively of the heroic bygones of Calculus. Infinitesimal analysis expands rapidly, bringing about radical reconsideration of the general conceptual system of mathematics. The principal reasons for this progress are twofold. Firstly, infinitesimal analysis provides us with a novel under­ standing for the method of indivisibles rooted deeply in the mathematical classics.