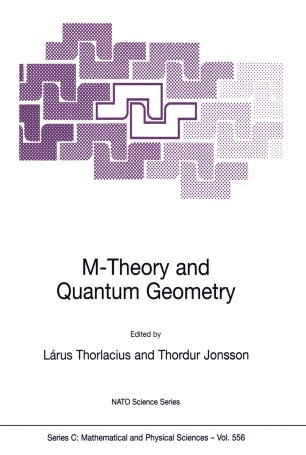 The fundamental structure of matter and spacetime at the shortest length scales remains an exciting frontier of basic research in theoretical physics. A unifying theme in this area is the quantization of geometrical objects. The majority of lectures at the Advanced Study Institute on Quantum Ge­ ometry in Akureyri was on recent advances in superstring theory, which is the leading candidate for a unified description of all known elementary par­ ticles and interactions. The geometric concept of one-dimensional extended objects, or strings, has always been at the core of superstring theory but in recent years the focus has shifted to include also higher-dimensional ob­ jects, so called D-branes, which play a key role in the non-perturbative dynamics of the theory. A related development has seen the strong coupling regime of a given string theory identified with the weak coupling regime of what was previ­ ously believed to be a different theory, and a web of such" dualities" that interrelates all known superstring theories has emerged. The resulting uni­ fied theoretical framework, termed M-theory, has evolved at a rapid pace in recent years.