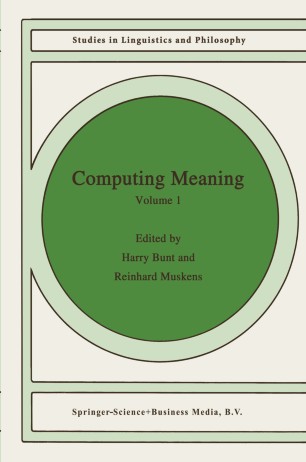 Part of the Studies in Linguistics and Philosophy book series (SLAP, volume 73)

Computational semantics is concerned with computing the meanings of linguistic objects such as sentences, text fragments, and dialogue contributions. As such it is the interdisciplinary child of semantics, the study of meaning and its linguistic encoding, and computational linguistics, the discipline that is concerned with computations on linguistic objects.
From one parent computational semantics inherits concepts and techniques that have been developed under the banner of formal (or model-theoretic) semantics. This blend of logic and linguistics applies the methods of logic to the description of meaning. From the other parent the young discipline inherits methods and techniques for parsing sentences, for effective and efficient representation of syntactic structure and logical form, and for reasoning with semantic information. Computational semantics integrates and further develops these methods, concepts and techniques.
This book is a collection of papers written by outstanding researchers in the newly emerging field of computational semantics. It is aimed at those linguists, computer scientists, and logicians who want to know more about the algorithmic realisation of meaning in natural language and about what is happening in this field of research. There is a general introduction by the editors.

"... the editors did a good job in projecting a collection of works representing the state of the art in computational semantics. The book contains material that will be of value especially to experts in this field. However, most of the papers in the volume will also be relevant to researchers from other branches of computational linguistics who are interested in theoretical aspects of the computation of meaning in natural language."
(Computational Linguistics, 27:1 (1999)
Buy options