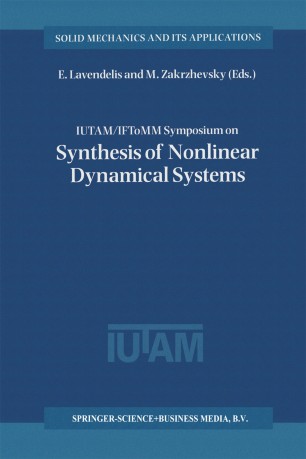 Part of the Solid Mechanics and its Applications book series (SMIA, volume 73)

The IUT AM / IFToMM Symposium on Synthesis of Nonlinear Dynamical Systems, held in Riga, Latvia, 24-28 August 1998, was one of a series of IUTAM sponsored symposia which focus on the theory and application of methods of nonlinear dynamics in mechanics. The symposium follows eighteen symposia on Analysis and Synthesis of Nonlinear Mechanical Oscillatory Systems held at Riga Technical University from 1971 to 1991 and in 1996 (prof. E. Lavendelis and Prof. M. Zakrzhevsky). Early in the late fifties and sixties Prof. J. G. Panovko organised several successful conferences in Riga on Nonlinear Oscillations. The participants in all these conferences and symposia (except 1996) were only from the ex-Soviet Union. This symposium, organised by the Institute of Mechanics of Riga Technical University, brought together scientists active in different fields of nonlinear dynamics. Selected scientists from 14 countries represented a wide range of expertise in' mechanics, from pure theoreticians to people primarily oriented towards application of nonlinear and chaotic dynamics and nonlinear oscillations. The goal of the symposium was to stimulate development of the theory of strongly nonlinear dynamical systems and its new applications in the fields of applied mechanics, engineering and other branches of science and technology.