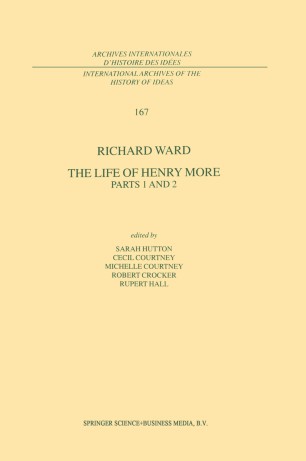 The Life of Henry More

This edition of the Life of Henry More by Richard Ward is the outcome of twin initiatives: from Rupert Hall and from delegates at the conference on the Cambridge Platonists held at Nantes in 1993. The project took shape at a meeting of the editorial team at Christ's College in 1994. The editors wish to express their thanks to the Master and Fellows of Christ's College for permission to print the unpublished manuscript section of Ward's Life and for their generosity in supporting the project. We also thank the British Academy for the Major Research Award towards the cost of producing the printed copy. We thank John L. Dawson, Manager of the Literary and Linguistic Computing Centre of the University of Cambridge and his staff, Beatrix Bown and Rosemary Rodd, for their technical assistance with the physical preparation of the text. Thanks also to Douglas de Lacey for his help with Greek and Latin orthography, and to James Binns for his help in identifying some quotations. We are particularly grateful to Beatrix Bown for her unfailingly patient work in transcribing and correcting the printed and manuscript texts. S. H. 06j/t . J;pt:. l. ~0i37. J£ti7tU 7. 2 /mz,·rtlln J Ll1t'tz,//Utn LO, ~ "IEl-I"/(/ll 2 O. Engraved portrait of Henry More, by D. Loggan: Frontispiece to The Life of Henry More, by Richard Ward, London, 1710. vii TABLE OF CONTENTS Preface V List of Illustrations: VIll Introduction: I. Richard Ward IX II.