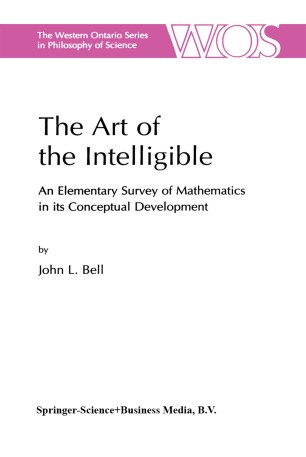 The Art of the Intelligible

An Elementary Survey of Mathematics in its Conceptual Development

Part of the The Western Ontario Series in Philosophy of Science book series (WONS, volume 63)

A compact survey, at the elementary level, of some of the most important concepts of mathematics. Attention is paid to their technical features, historical development and broader philosophical significance. Each of the various branches of mathematics is discussed separately, but their interdependence is emphasised throughout. Certain topics - such as Greek mathematics, abstract algebra, set theory, geometry and the philosophy of mathematics - are discussed in detail. Appendices outline from scratch the proofs of two of the most celebrated limitative results of mathematics: the insolubility of the problem of doubling the cube and trisecting an arbitrary angle, and the Gödel incompleteness theorems. Additional appendices contain brief accounts of smooth infinitesimal analysis - a new approach to the use of infinitesimals in the calculus - and of the philosophical thought of the great 20th century mathematician Hermann Weyl.
Readership: Students and teachers of mathematics, science and philosophy. The greater part of the book can be read and enjoyed by anyone possessing a good high school mathematics background.

`... impressively broad and far-ranging... written in an accessible and engaging style... The appendix on Gödel's theorems...is clear and easy to follow... a clear and straightforward survey of the conceptual development of mathematics. It is a wonderful addition to the literature...provides an accessible introduction to the subject matter. I recommend it to anyone who has an interest in mathematics and its development.'
Philosophia Mathematica, 8:3 (2000)