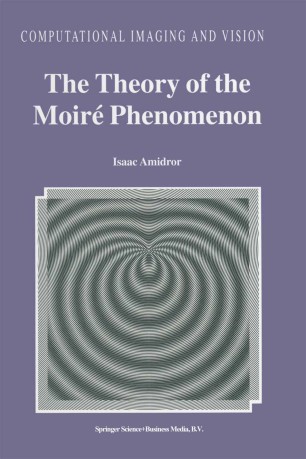 Who has not noticed, on one o~casion or another, those intriguing geometric patterns which appear at the intersection Of repetitive structures such as two far picket fences on a hill, the railings on both sides of a bridge, superposed layers of fabric, or folds of a nylon curtain? This fascinating phenomenon, known as the moire effect, has found useful applications in several fields of science and technology, such as metrology, strain analysis or even document authentication and anti-counterfeiting. However, in other situations moire patterns may have an unwanted, adverse effect. This is the case in the printing world, and, in particular, in the field of colour reproduction: moire patterns which may be caused by the dot-screens used for colour printing may severely deteriorate the image quality and tum into a real printer's nightmare. The starting point of the work on which this book is based was, indeed, in the research of moire phenomena in the context of the colour printing process. The initial aim of this research was to understand the nature and the causes of the superposition moire patterns between regular screens in order to find how to avoid, or at least minimize, their adverse effect on colour printing. This interesting research led us, after all, to a much more far­ reaching mathematical understanding of the moire phenomenon, whose interest stands in its own right, independently of any particular application.