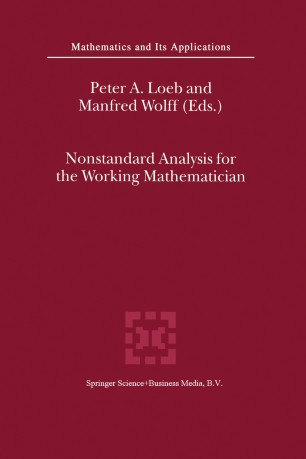 Nonstandard Analysis for the Working Mathematician

Part of the Mathematics and Its Applications book series (MAIA, volume 510)

This book is addressed to mathematicians working in analysis and its applications. The aim is to provide an understandable introduction to the basic theory of nonstan­ dard analysis in Part I, and then to illuminate some of its most striking applications. Much of the book, in particular Part I, can be used in a graduate course; problems are posed in all chapters. After Part I, each chapter takes up a different field for the application of nonstandard analysis, beginning with a gentle introduction that even non-experts can read with profit. The remainder of each chapter is then addressed to experts, showing how to use nonstandard analysis in the search for solutions of open problems and how to obtain rich new structures that produce deep insight into the field under consideration. The applications discussed here are in functional analysis including operator theory, probability theory including stochastic processes, and economics including game theory and financial mathematics. In all of these areas, the intuitive notion of an infinitely small or infinitely large quantity plays an essential and helpful role in the creative process. For example, Brownian motion is often thought of as a random walk with infinitesimal increments; the spectrum of a selfadjoint operator is viewed as the set of "almost eigenvalues"; an ideal economy consists of an infinite number of agents each having an infinitesimal influence on the economy. Already at the level of calculus, one often views the integral as an infinitely large sum of infinitesimal quantities.