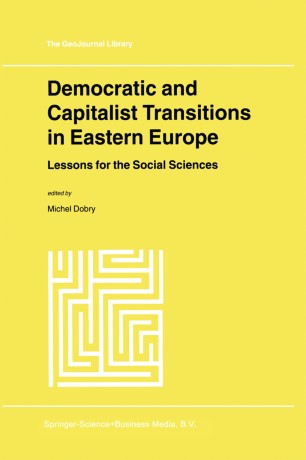 Lessons for the Social Sciences

Part of the The GeoJournal Library book series (GEJL, volume 55)

here ofexchange, and borrowing in debates between these disciplines, all the more so, as we shall see a little further on, as the analysis of the Central and East European transformations has also contributed to introduce into political science and sociology theoretical systematizations first formulated in economics. In addition to this opening up to the objects and theories of economics, the pseudo-"dilemma" ofsimultaneity produced, by a kind of feedback, another series of effects on transitology and the related research domains. Contrary to most expectations and predictions in the wake ofthe 1989 upheavals - affirmations that the "dilemmas", "problems" or "challenges" of the transitions in Central and Eastern Europe ought to have been dealt with and resolved one after the other in sequence, in the manner of the more or less idealized trajectories of Great Britain or Spain (trajectories significantly enough promoted, far beyond the circles of scholars, as a "model" of transition), and above all, contrary to the assumption that superposing a radical economic transformation upon a transition to democracy would make the whole edifice thoroughly unworkable, unstable or dangerous - it must be stated clearly out that the two processes, in their "simultaneity", are not necessarily incompatible. This is one of the main findings stressed upon in several chapters of this book.

Michel Dobry is Professor of Political Science at the University of Paris X, Nanterre, and Director of the Laboratoire d'Analyse des Systèmes Politiques (CNRS). His works have greatly contributed to the ongoing renewal of the analysis of processes of political crises and, more generally, critical political conjunctures.