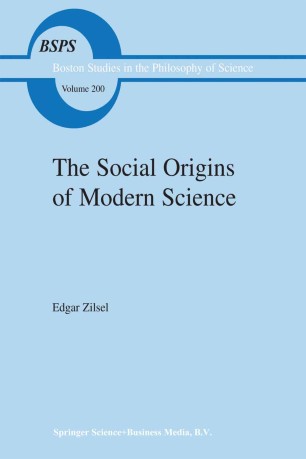 The Social Origins of Modern Science

Part of the Boston Studies in the Philosophy of Science book series (BSPS, volume 200)

Edgar Zilsel (1891-1944) lived through the best of times and worst of times, through the renewal of scientific optimism and humane politics, and through the massive social collapse into idolatrous barbarism. With it all, and with his per­ sonal and family crises in Vienna and later in America, Zilsel was, I believe, a th heroic, indeed a model, scholar of the first half of the 20 century. He was widely admired as a teacher, at high schools, in workers education, in research tutoring and seminars. He was an original investigator on matters of the methodology of science, and of the history of the sciences. He was a social and political analyst, as a critical Marxist, of the turmoil of Vienna in the 20s. Above all, he achieved so much as a sociological historian who undertook re­ search on two central facts of the early modern world: recognition of the cre­ ative individual, and the ideal of genius; and the conditions and realities of the coming of science to European civilization.