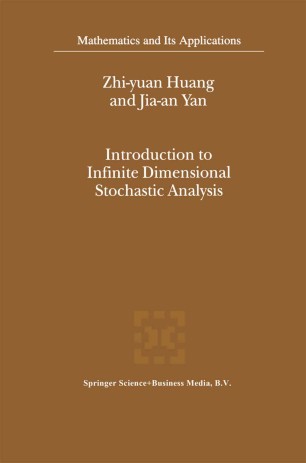 Part of the Mathematics and Its Applications book series (MAIA, volume 502)

The infinite dimensional analysis as a branch of mathematical sciences was formed in the late 19th and early 20th centuries. Motivated by problems in mathematical physics, the first steps in this field were taken by V. Volterra, R. GateallX, P. Levy and M. Frechet, among others (see the preface to Levy[2]). Nevertheless, the most fruitful direction in this field is the infinite dimensional integration theory initiated by N. Wiener and A. N. Kolmogorov which is closely related to the developments of the theory of stochastic processes. It was Wiener who constructed for the first time in 1923 a probability measure on the space of all continuous functions (i. e. the Wiener measure) which provided an ideal math­ ematical model for Brownian motion. Then some important properties of Wiener integrals, especially the quasi-invariance of Gaussian measures, were discovered by R. Cameron and W. Martin[l, 2, 3]. In 1931, Kolmogorov[l] deduced a second partial differential equation for transition probabilities of Markov processes order with continuous trajectories (i. e. diffusion processes) and thus revealed the deep connection between theories of differential equations and stochastic processes. The stochastic analysis created by K. Ito (also independently by Gihman [1]) in the forties is essentially an infinitesimal analysis for trajectories of stochastic processes. By virtue of Ito's stochastic differential equations one can construct diffusion processes via direct probabilistic methods and treat them as function­ als of Brownian paths (i. e. the Wiener functionals).

'The book is well written and nicely structured [...] will surely become a valuable resource for specialists in stochastic analysis as well as mathematical physicists.'
Mathematical Reviews (2002)
Buy options