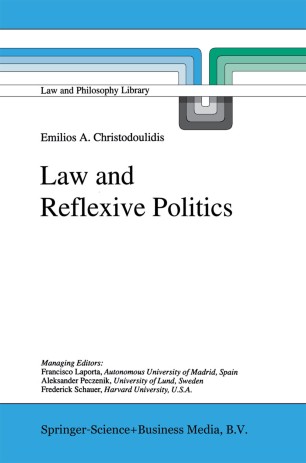 Law is the great concealer; and law is everywhere. Or so claimed Marxists once upon a time. [Law] was imbricated within the mode of production and productive relations themselves . . . it intruded brusquely within alien categories, re-appearing bewigged and gowned in the form of ideology; . . . it was an arm of politics and politics was one of its arms; it was an academic discipline, subjected to the rigour of its own autonomous logic, it contributed to the definition of the self-identity of both the rulers 1 and the ruled. Does the old critique of domination still hold any sway? Apparently not. Or so even scholars of the far Left keep reminding us in their eagerness to embrace law and proclaim their allegiance to the new constitutional politics of civil society. Old Marxists now describe popular sovereignty as 'co-original' with, and democracy 'internally linked' to 2 constitutional rights and find it hard to remember what it was they once disagreed with liberals about. No tension left between emancipatory politics and oppressive law; instead we have reciprocal constitution, simultaneous realisation. In the Left's embracing of the new constitutionalisms its old critique of law - the critique of the law's concealment of class inequality, class conflict and class action - is left behind.